How To Catch a Shark

All you really need to do is go fishing and eventually you will end up catching a shark. Normally what most people mean when they ask this question is "How do I catch a big shark?" and even that is subjective. What is comes down to is the bait you are using and location you are casting.
Big Bait = Big Fish
Yes, this is true. Very simply stated, if you deploy a 4 pound bait with a 24/0 circle hook, you probably won’t catch a slot redfish. Either that large bait is going to get picked to nothing by smaller fish and crabs or it will get picked up by something large enough that can eat it. But you know what? Big fish eat small baits too. Realistically, you probably won't catch an 8ft shark on a shrimp but it could happen. I once had a fish hit a finger mullet in this 1st gut (at night) and run so hard it popped 100lb mono (PINS). On the norm, yes, you should use larger bait when targeting sharks. Fish heads, whole fish, hardhead and Gafftop bodies and sections or whole stingray are great bait selections.
​ 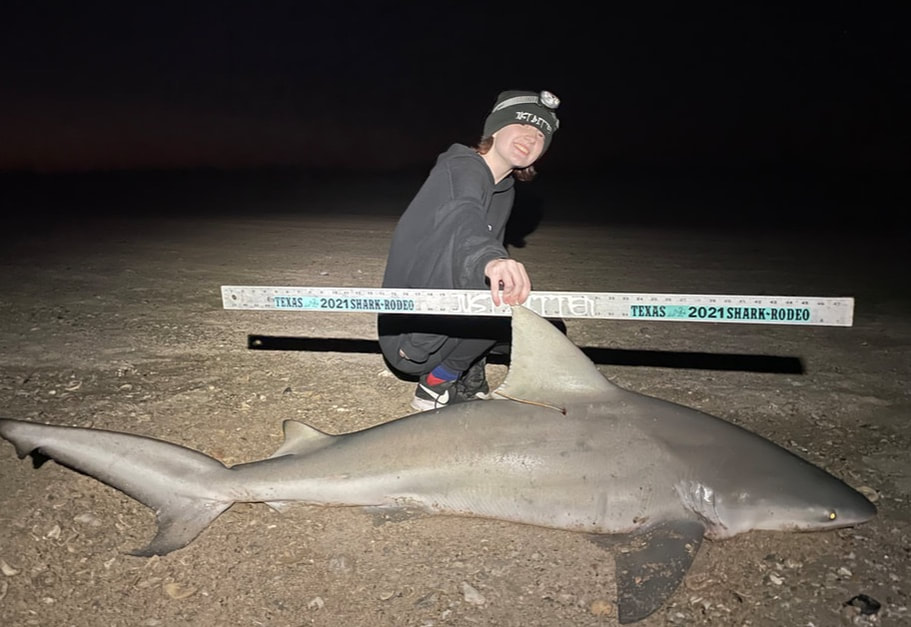 My daughter's first shark that was bigger than her. This bull shark was caught on a casted rod.
Location, Location, Location
Sometimes sharks come in close and sometimes they are out really far. Most of the time they're looking for food in close where the bait fish are, in the guts. My go-to spot for catching sharks is in the 2nd gut. If you're casting, wade out to the first bar and try to cast over the second bar. Do this with a primetime bait and you will catch a shark.
Have a Plan and Know The Law
Before you set out on your shark fishing expedition, have a plan. What are you going to do when you catch a shark? Are you going to keep it or release it? Some shark species are protected and have hefty fines and possibly jail time if kept. A young gentlemen reached out to me for advice though FB and asked me how to catch a shark. I did everything I could to warn him on shark safety and the shark fishing laws but he was young and invincible. He was from a state that did not allow shark fishing and he caught and killed a shark that was protected. He did get jail time and a $20,000 fine. In Texas and Florida, you must use certain tackle if you are targeting sharks. If you plan on releasing a shark, have a plan on how you're going to do it. Sharks are easily killed if handled properly and it is imperative to get them released quickly.
Hook Removal From a Shark
It is good practice to either cut off the hook barb or bend it in. I do this with all of my hooks and I have never lost a fish because of it. It is tremendously helpful when removing the hook. If you are having a hard time getting the hook out, cut the hook! I bring a pair of bolt cutters with me just in case. If you were not prepared and did not bring bolt cutters, use a pair of diagonal cutters and cut the bite leader as close to the hook as you can. Leaving the hook in the shark is obviously not the best case scenario but it’s better than dealing with a dead shark.
Getting a Shark Out of the Water
With smaller sharks, you can go out and grab them by the tail and walk them in backwards. Larger sharks will require you to wrap a rope around the tail and drag them in this way. There are some great videos out there that go over this and I highly recommend that you watch them.
​
Identifying Sharks
If you plan on catching sharks, you will need to know how to identify them. Properly identifying sharks is a tough task and even guys that claim thy can do it are wrong sometimes. The first step is to begin with a reliable website and reading about them to find identifiable characteristics. Familiarize yourself with sharks commonly found in your area. In Texas, some commonly caught sharks are Atlantic Sharpnose, Blacktips, Bonnetheads, Bull Sharks, Finetooth Sharks, Greater Hammerhead, Scalloped Hammerhead, Lemon Sharks, Sandbar Sharks and Spinner Sharks. Once you think you can figure it out, practice. I used to go through the pictures on the Texas Shark Rodeo website and see if I could guess the sharks before looking to see what they were. Seeing pictures and actually having on in front of you is a different story. If you post on a social media site to ask about the shark ID, chances are you will get a bunch of clowns telling you it's a whiting, or a tarpon.

Here is a quick cheat sheet that I used to use when I first began shark fishing. 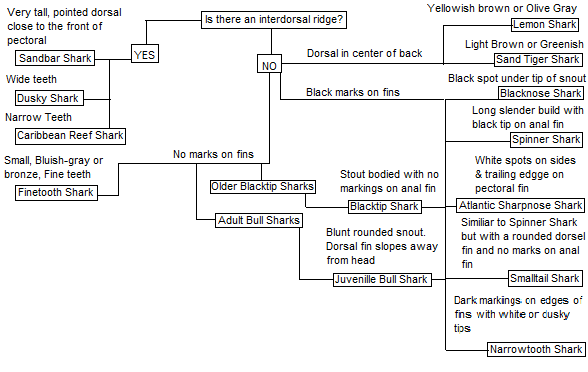 Shark Safety
Like I previously said, have a plan BEFORE you catch a shark. It is obvious that handling a shark can be dangerous. Razor sharp teeth that will sometimes bite down and not let go. Something that can be equally dangerous as the razor sharp teeth is the tail. Being tail whipped can be painful. It can also make you sick and if not properly cared for, require amputation of the limb that was hit. A shark’s skin is rough like sandpaper and bacteria lives on that skin. When you are tail whipped, the bacteria on the shark’s tail is transferred to you and pushed into your skins spores. This bacteria can remain localized or it can also enter your blood stream. In most cases, immediately pouring peroxide on the wound will prevent it from becoming too bad but if redness and swelling persist, you may need to go see a doctor. This is especially true when Vibrio (Flesh eating Bacteria) is present in the water during warm water temps. I have permanent scars on me from being tail whipped and open wounds that took almost a month to heal.

Remember this, when a shark is on the sand it can only move from side to side. It cannot move forward or backwards. When dehooking, I am directly in front of the shark and I push up its nose to open the mouth and remove the hook. It can only bite me if I get my hand near the side of the mouth. Use a long pair of pliers and/or a dehooker to get the hook out.

When releasing a shark, drag him into the water by the tail. When you feel his body become buoyant in the water, turn him toward the ocean. You may need to hold the shark upright until it gets it bearings. Sometimes you need to hold the shark out there for a few minutes so be prepared. You may need to give him a slap on the tail to get him going. Once the shark starts swimming off, keep your eye on it. Sharks may still be disoriented and swim back toward you.
Back to The Basics